Skip to main content
Posted by The Gardens at Pemberley November 08, 2008 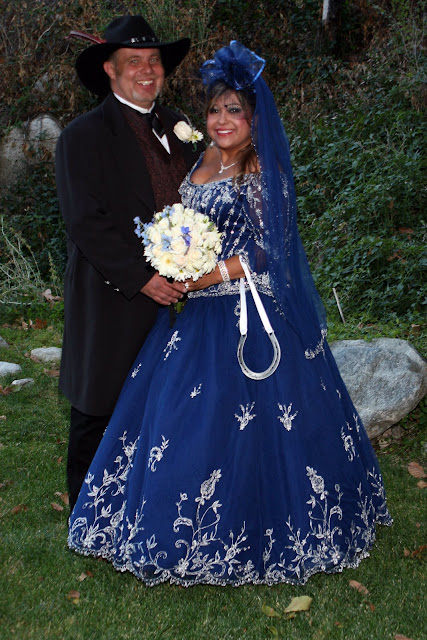 Michelle and Andy were married at a charming historic location nestled in the foothills of Lytle Creek, now known as Hidden Acres. They chose an Old West theme for their wedding, and took advantage of the rustic, natural setting of the old mining camp ranch to complement their decor. The beautiful photos were captured by Photography by Rhonda McKenney. 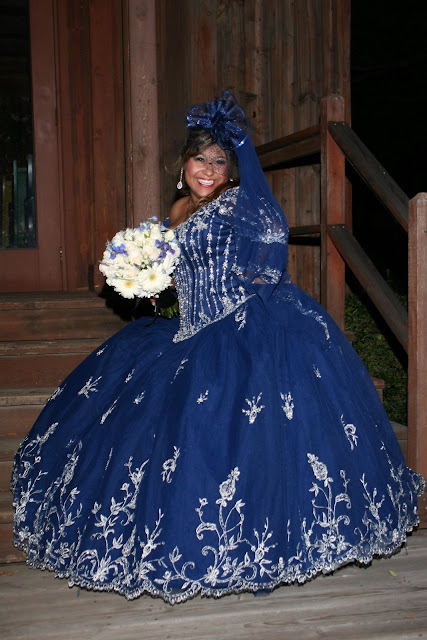 Michelle wanted nothing traditional. Instead she chose striking colors of indigo blue and claret red. She also chose music and entertainment for their guests provided by Guns and Garters, a theatrical group who specializes in the Old West. The group reenacted western themed skits, played fiddle music for the processional, and provided important education about gun safety with the use of theatrical blanks. The long arm of the law even got Andy to the wedding on time, as guests watched the Sheriff and his Deputies corral the Groom down to the alter, shotguns in tow! The guests were also encouraged to dress for the occasion, and it was as though everyone had stepped back in time to the Gold Rush days! 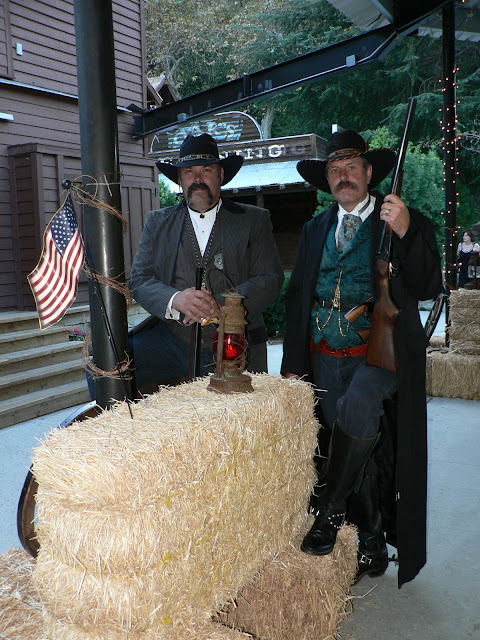 We decorated the Lakeside Gazebo and aisle with ivory tulle and dried flower arrangements. Most of the arrangements were in dried flowers to keep an old west feel to the decor. 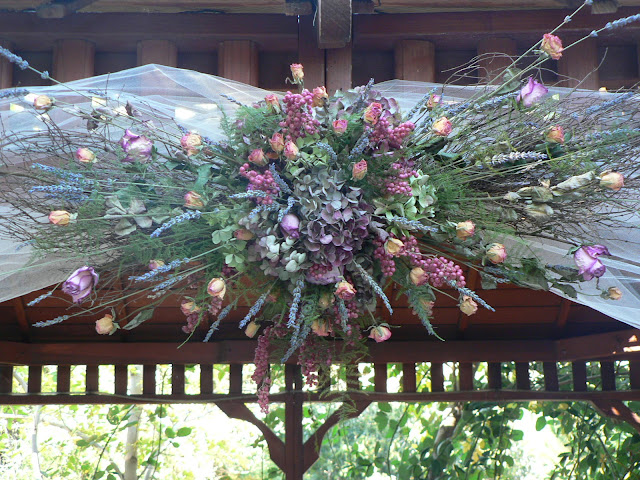 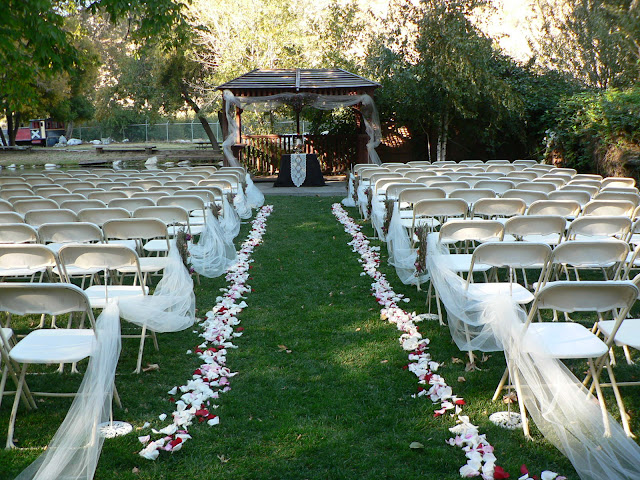 We also decorated a wagon with dried roses, fragrant lavender, trailing cans, ribbon, and American flags. The wagon was used to transport some little ones down the aisle! 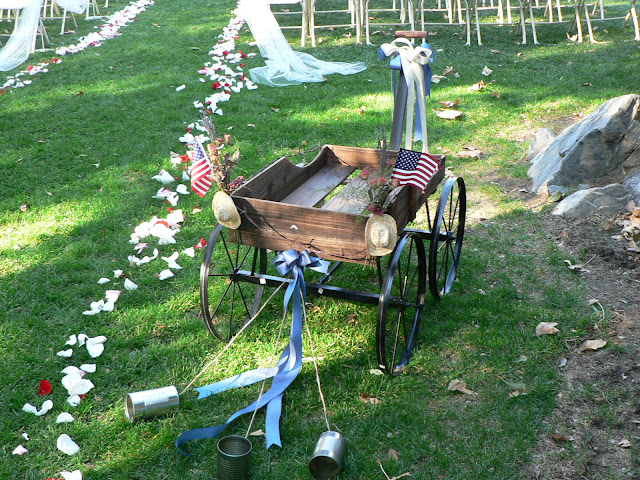 Michelle had chosen to use dried flowers based upon a photo on a Mothers' Day card that she had received from her son. 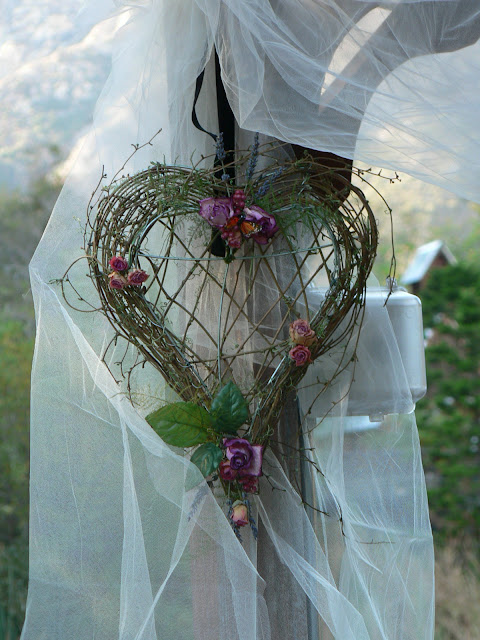 We reproduced the heart shaped wreaths from the card, and used them for the aisle arrangements. Then we carried that same theme through the the rest of the arrangements and decor, including the gazebo spray, reception table arrangements, unity candles, and guestbook table. 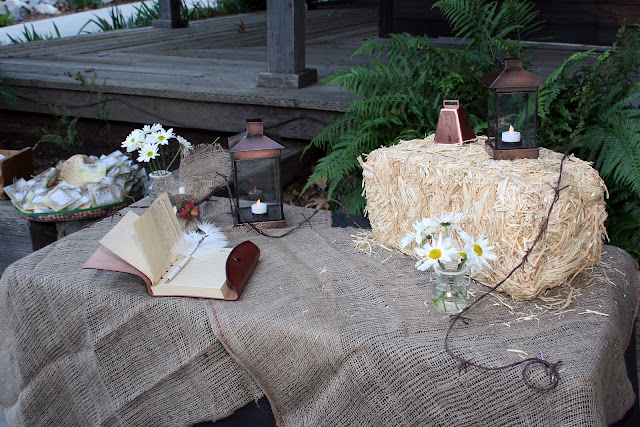 Even the pen for the guestbook was given a makeover to match the old west themed decor! 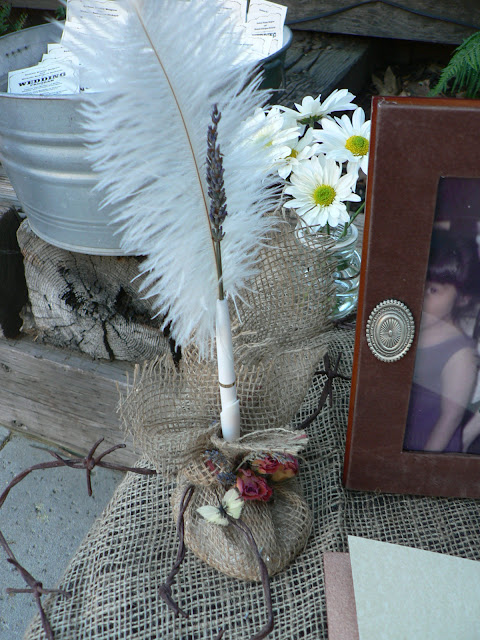 The reception table arrangements were made of grapevine wreathes adorned with dried roses, lavender, hydrangea, and plumosa. Inside each wreath was a bronze lantern. The lanterns were of various styles and sizes to add to the rustic charm of the decor. All the tables were covered in natural jute to be reminiscent of old burlap sacks. The fabric really added an authenic Old West feel to the reception, as did the imitation barbed-wire! 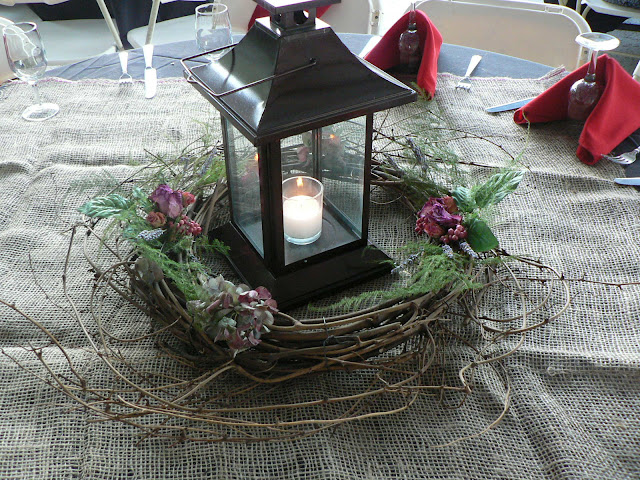 The Bride and Maid of Honor had fresh flower bouquets of Vendela roses, two shades of blue delphinium, Gerbera, daisies, and dried lavender. We added red Freedom roses to the Maid of Honor's bouquet to coordinate with her dress of Claret red. 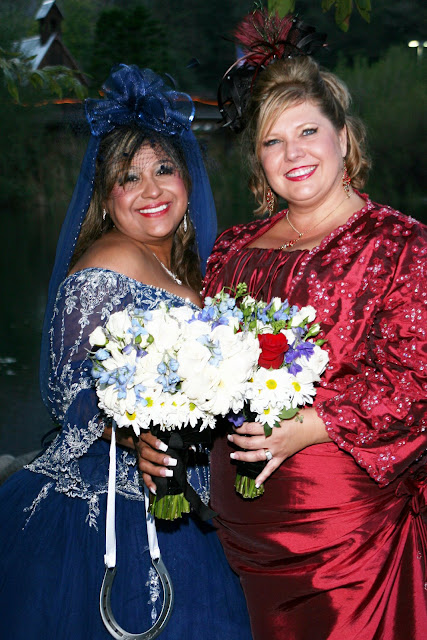 The cake table was finished with daisy-filled miniature Ball jars, faux butterflies, and more imitation barbed-wire. The throw bouquet was a blend of roses, daisies, and delphinium. The unique western themed cake was provided by Cucamonga Cakery in Rancho Cucamonga. 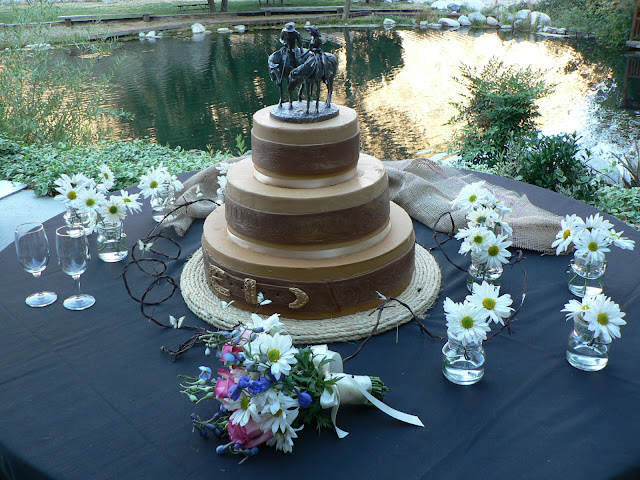 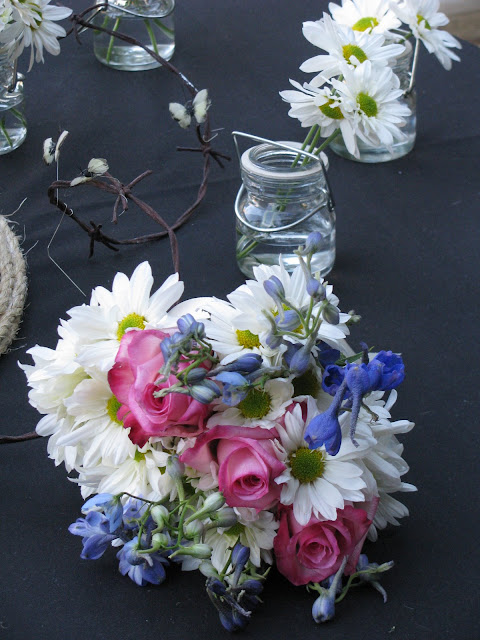 We had so much fun helping Michelle plan her wedding, and then helping to make her dream of an Old West wedding come true. It was one of our favorites!

We would love to work with you on your wedding or special event!
Contact us at RomanticWeddingFlowers.com

The Gardens at Pemberley
Rancho Cucamonga, California, United States
Your Southern California dream wedding should be perfect. We help create the ideal wedding flowers and floral arrangements for your Inland Empire wedding. We have a passion for creating beautiful floral design and for delivering an outstanding client experience. Our mission is to listen well and give you the space to express what you’ve been dreaming of. Then we translate that vision into a floral design that you will love and remember for years to come!

We would love the opportunity to design the flowers for your elopement, wedding or special event!

Let's Chat.
RomanticWeddingFlowers.com
For our Permanent Botanicals (Silk Designs), Visit us at:
GardensatPemberley.etsy.com

Our Sister Shop offers lovely items you simply can not live without!
The Drawing Room at Pemberley 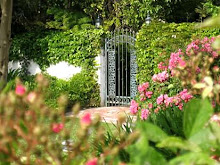